Prof. Carl Robert Keyes, historian and longtime friend of the D’Amour Center for Teaching Excellence, has been curating a fascinating digital project for several years now on advertising in early America. As he explains on the The Adverts 250 Project web site:

“The Adverts 250 Project explores the history of advertising in eighteenth-century America.  It features a daily image of an advertisement published in a colonial newspaper 250 years ago that day.  Brief commentary accompanies each advertisement.” 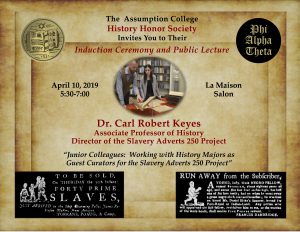 Our interest in this work stems from the fact that Carl’s students are collaborators on this project, playing the role of “guest curators,” which gives them the opportunity to engage in public history and interact with scholars from around the world. This innovative project has been featured and profiled in many places.

Carl will speaking about his work on this project at an upcoming event on our campus (see poster image); if you are in the area, his talk will be open to the public, and we invite you to come learn more about this fascinating work he has undertaken with his students.